After the much-anticipated fall of the previous week, the S&P500 (SPY) had been consolidating for four days until eventually posting a strong red candle on Friday. It will be interesting to observe if the rising trend-line, which has already been tested numerous times in recent months, will hold as a support again in the coming days. 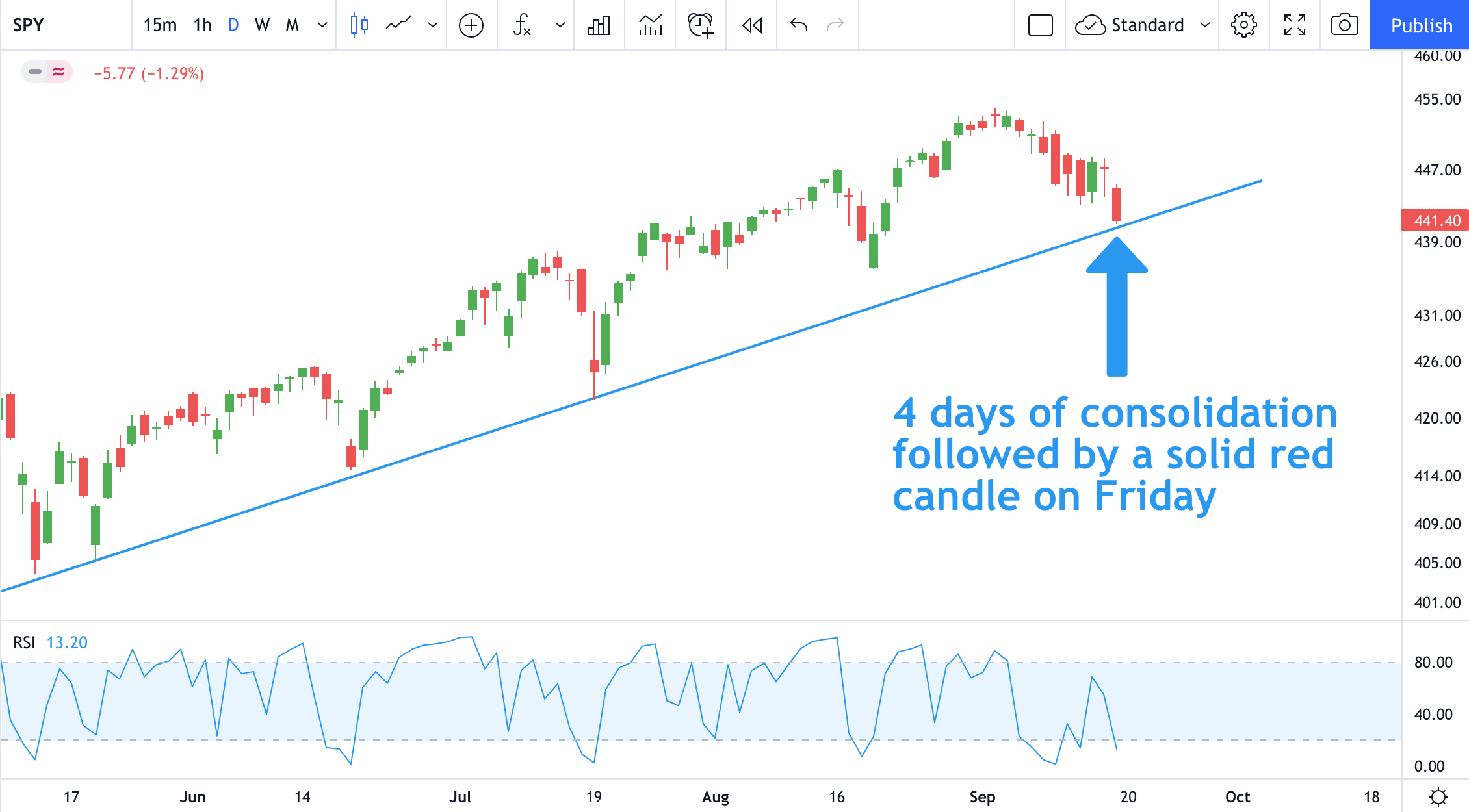 This red week for the broader market has seen only a slight increase in small-cap equities.

With the general market weakness, the Market Volatility Index (VIX) closed above the 20 threshold again on Friday night. 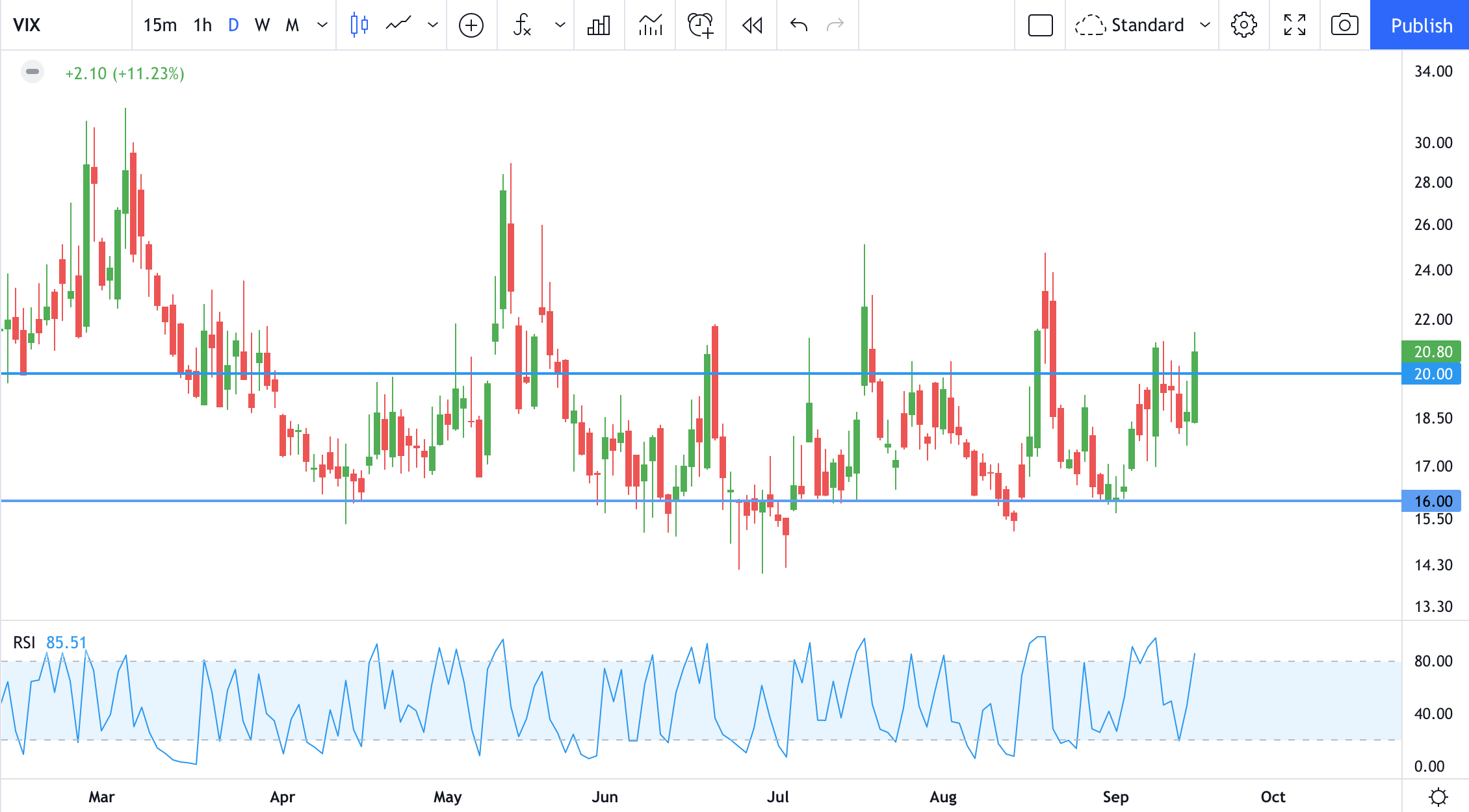 Here is a recap of last week's activities in my Trading Journals for each of the four official options strategies I trade within the Options Trading Club (OTC).

Full disclosure. I have complete personal involvement in the positions listed in my Weekly Reports. These are the real results of trades I make with real money in my trading account and share in real-time inside the Discord Chatroom.

This week has been quite busy, with a large number of positions expiring on the September monthly cycle. I was able to let some of them expire worthless for a 100% profit, while others required to be adjusted and rolled to a later expiration date.

In this report, I'd like to share a case study on a position that I opened before launching the Options Trading Club, thus not included in the official track record shown below. 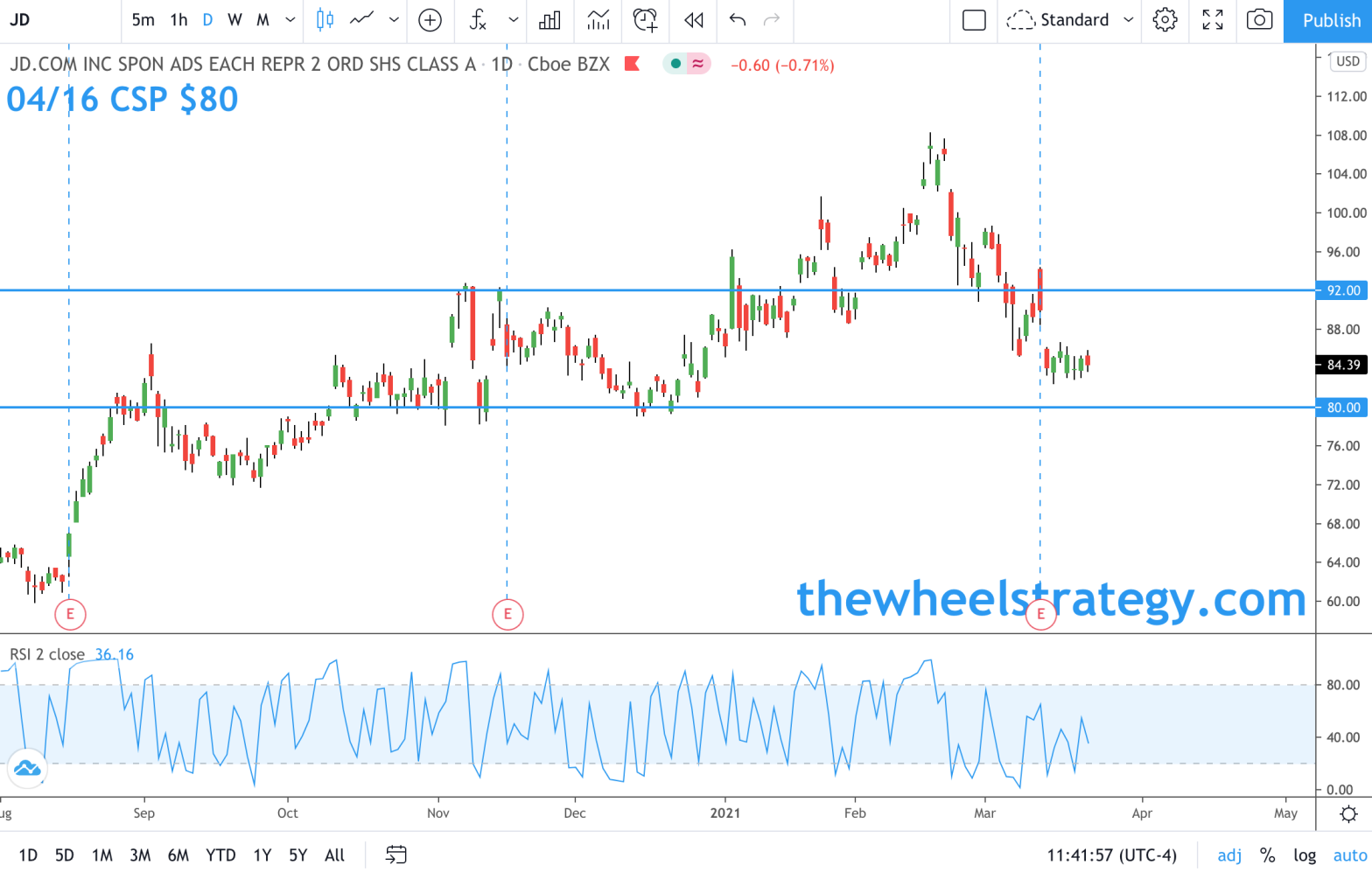 Unfortunately, the stock market had other plans, and JD continued to fall over the next several weeks, and then months, ultimately reaching a bottom above $60 just before the earnings announcement at the end of August. During this 6-month period, I rolled the trade 8 times and was able to reduce the strike price from $80 to $77.50 on one occasion. Finally, a few minutes before Friday's close, when the price was trading in the $77.80 range, I bought back the put for a $0.05 debit and exited the position.

In the end, with just one contract, I was able to retain a $671 total credit for an 18% AROI over 179 days. That is certainly less than the initial anticipated AROI of 31%, but it is still a remarkably good performance considering how badly the position went against me. In fact, when I terminated the trade on Friday, the stock price was still around 8% lower than when I entered it in March. 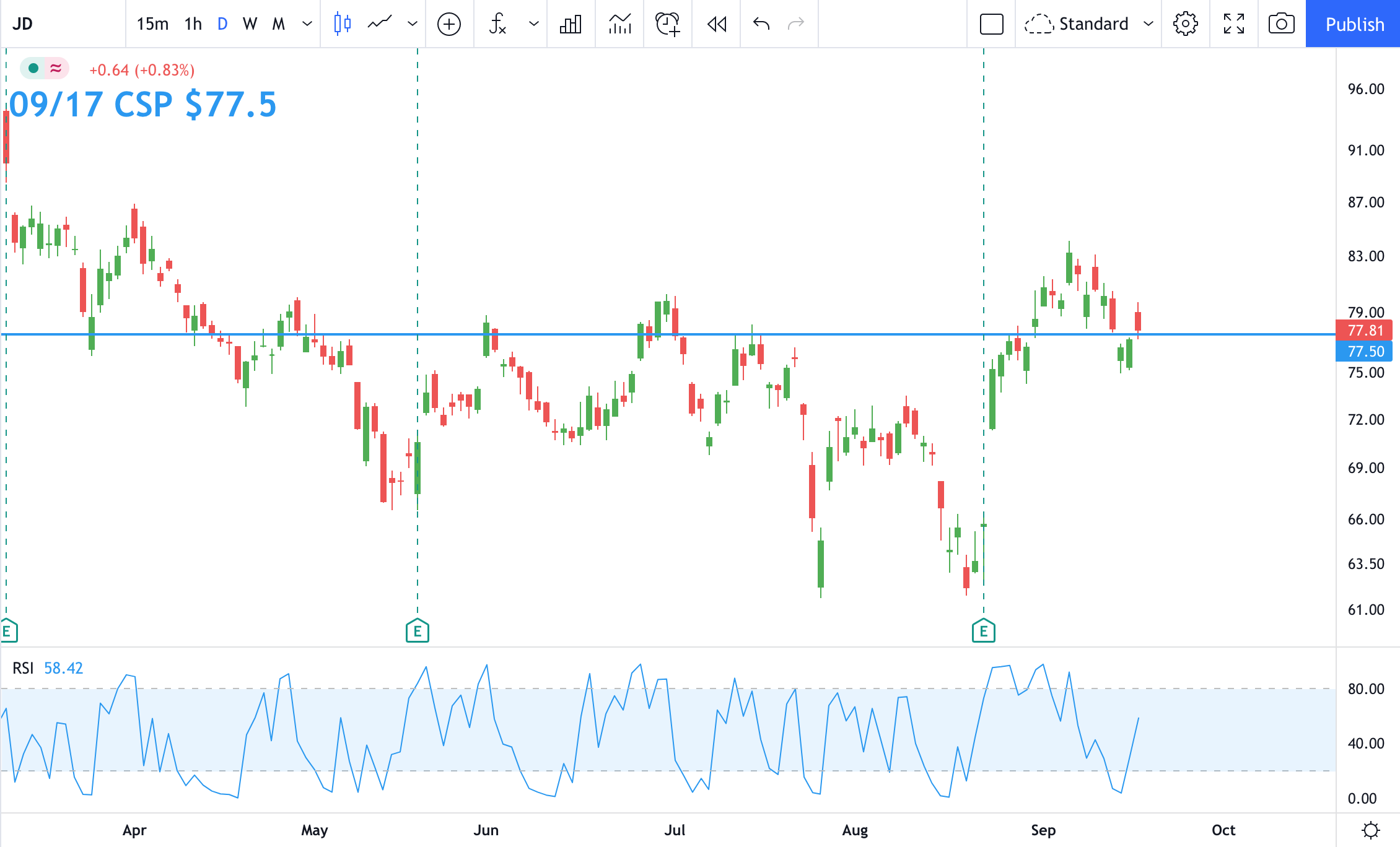 So far, since the debut of the Options Trading Club at the end of May 2021, I have closed a total of 53 successful trades with ZERO LOSSES inside my CSP Trading Journal channel. I was able to achieve a total net profit of $8,352 in less than 4 months by playing just one contract for each of the positions. 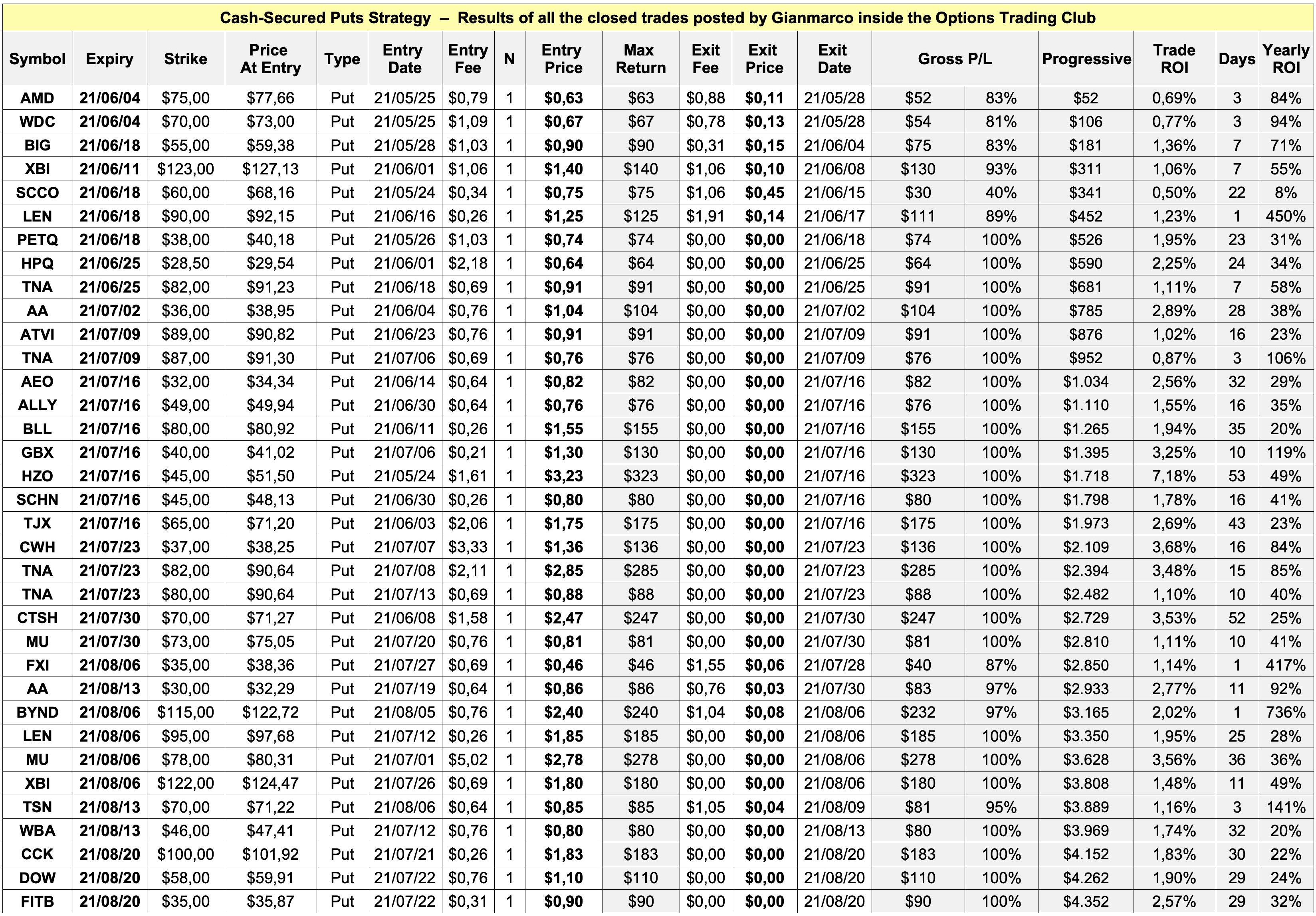 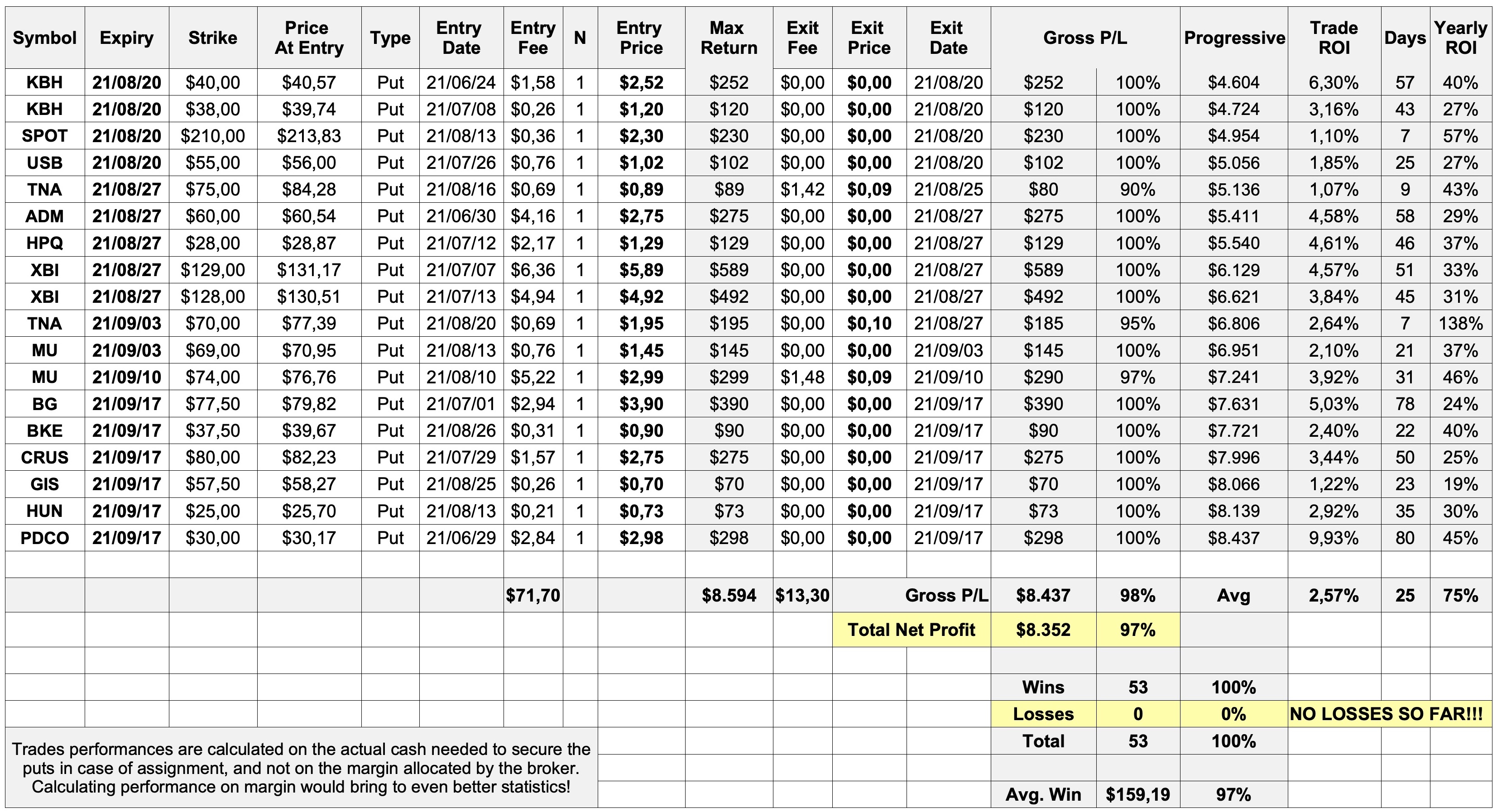 This week, I sold a new CSP on ARKK at the $114 strike, while the one that had already opened at the $118 strike expired worthless on Friday night, allowing me to keep 100 percent of the credit previously obtained. This new premium, together with the others I've received thus far, continues to lower the overall adjusted cost basis of the shares I own. 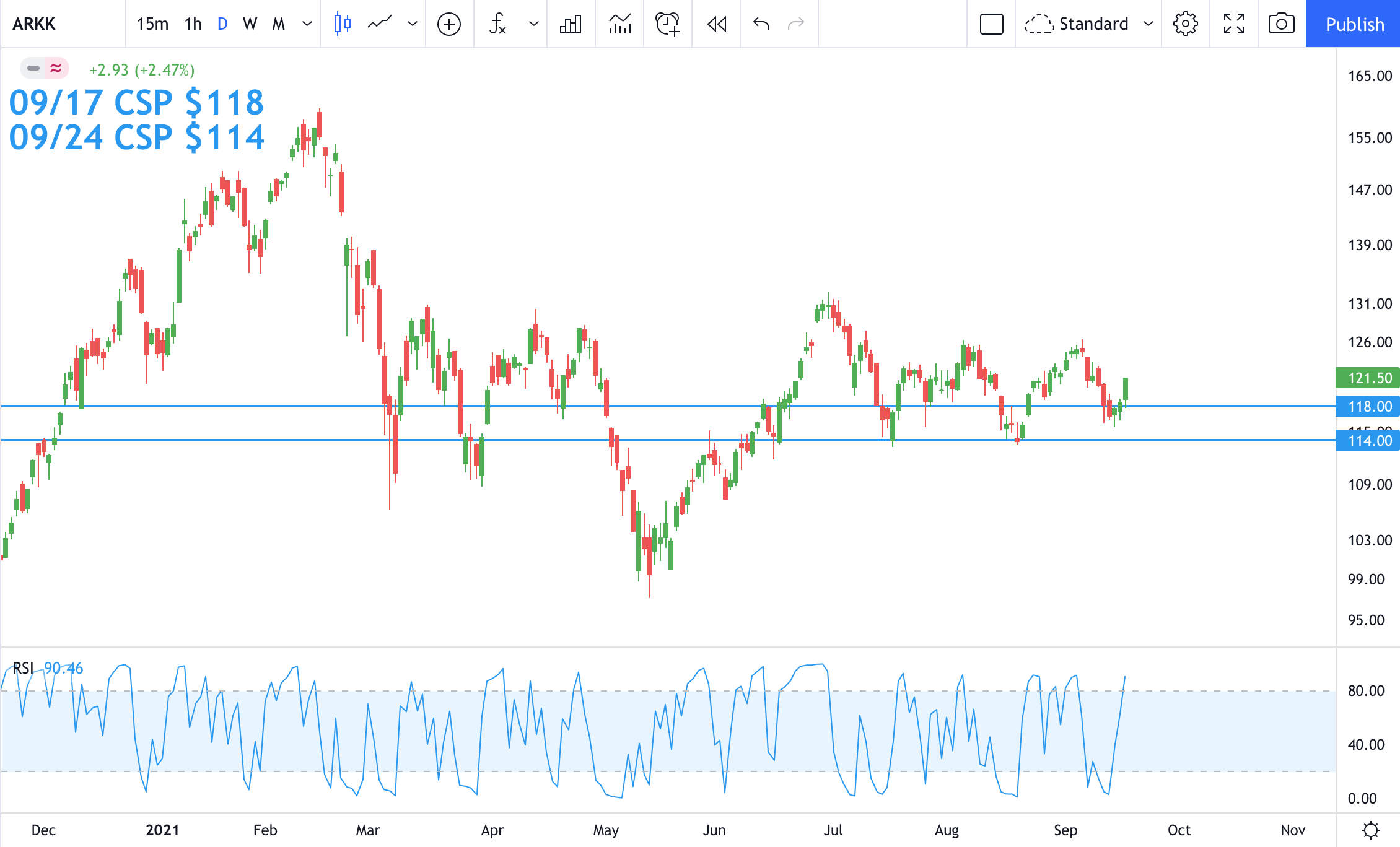 Inside my Credit Spread (CS) Trading JournalI I run a $1,000 virtual portfolio to show traders new to options (and with initial limited capital) how to manage a small account using a conservative options strategy, discipline, and patience.

I'm currently dealing with a Bull Put Spread on TTWO that has been moving a lot against me. Last week, I decided to roll it one week out for a $0.40 debit. This reduces my total net credit on the position to $0.50, which is still not that bad for a $5 spread, but I will need the stock to rebound over the next week in order to exit with a win or at least limit the loss on this position. In comparison to a cash-secured put, this trade demonstrates how much more difficult it is to adjust and try to repair a credit spread. 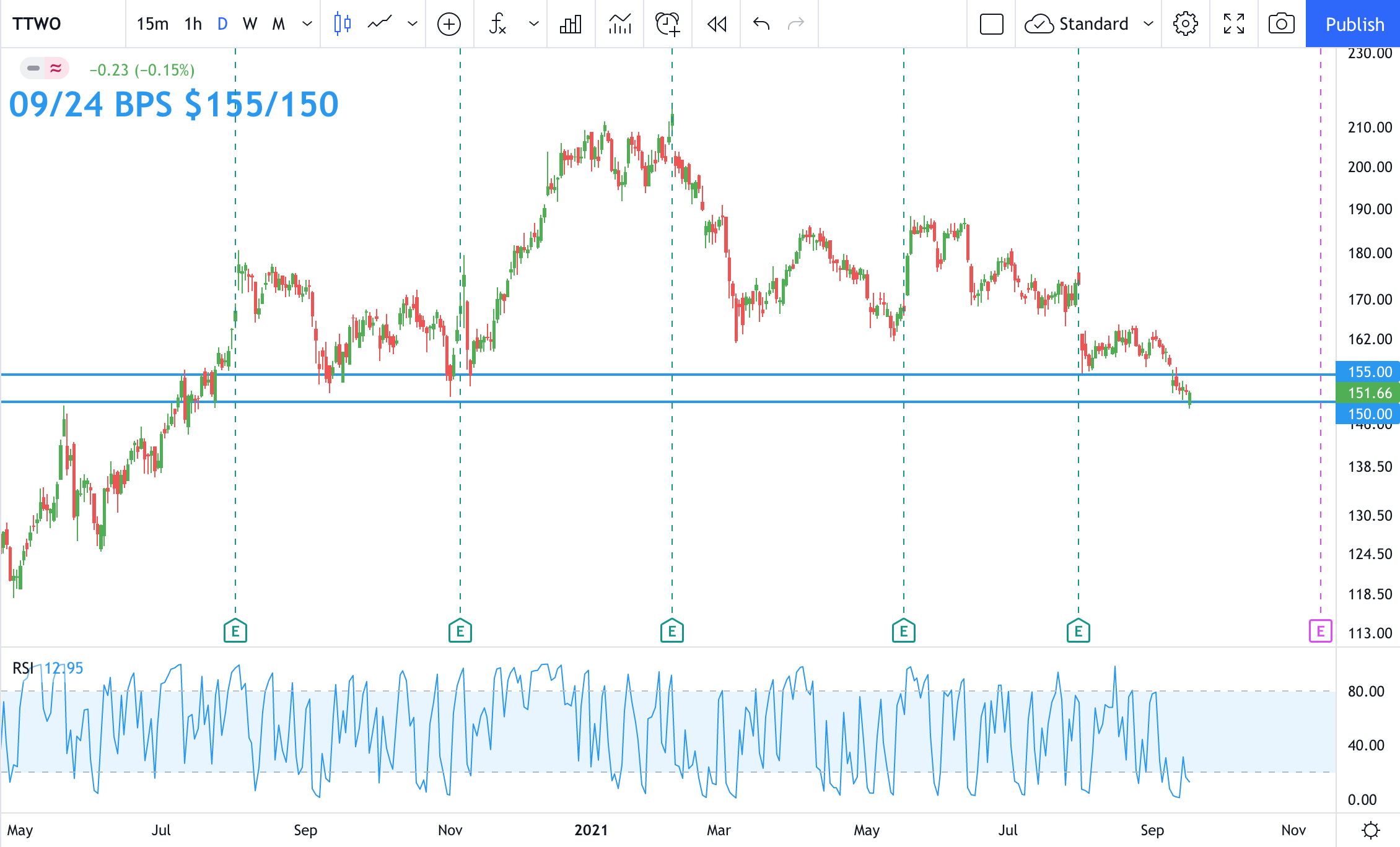 The Options Trading Club's fourth official technique is based on Time Spreads (TS), such as calendar or diagonal spreads. This approach is mostly used as a delta neutral edge against the other more directional strategies traded within the community.

There are no open positions for this strategy at the time, but I may look to open one in the coming week.

If you have any questions, just send me an email at [email protected]